Facebook Twitter LinkedIn
What makes an airport a “world’s best”? High-tech facilities? Friendly staff? Great leisure amenities? Speedy immigration service?
According to Skytrax World Airport Awards, being a global travel leader means constantly striving to improve, innovate and impress.
And so for 2019 — and for the seventh time in a row — Singapore Changi Airport is crowned the world’s best aviation hub, just in time for the opening of the much awaited Jewel Changi terminal, in April. 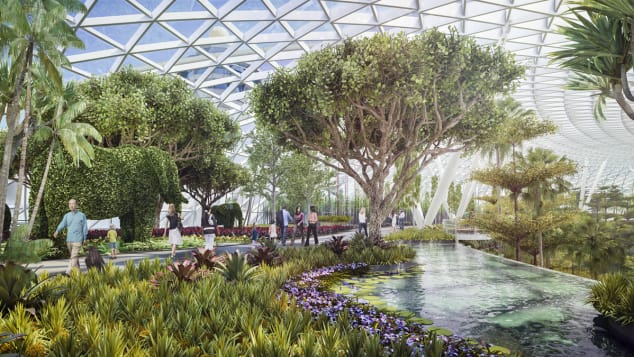 Canopy Park: The 14,000-square-meter Canopy Park will include gardens, walking trails, playgrounds and restaurants.
“To be voted the World’s Best Airport for the seventh consecutive year is a truly fabulous achievement for Changi Airport, and this award continues to underline the airport’s popularity with international air travelers,” Edward Plaisted, CEO of Skytrax said.
The prestigious accolade was awarded at the Passenger Terminal Expo 2019 in London on Wednesday.
The Skytrax World Airport Awards are voted for by customers in a global airport customer satisfaction survey.
As well as counting down the 10 best airports, Skytrax awards gongs for categories including regional airports, best airport staff, airport dining, baggage delivery and cleanest airport. 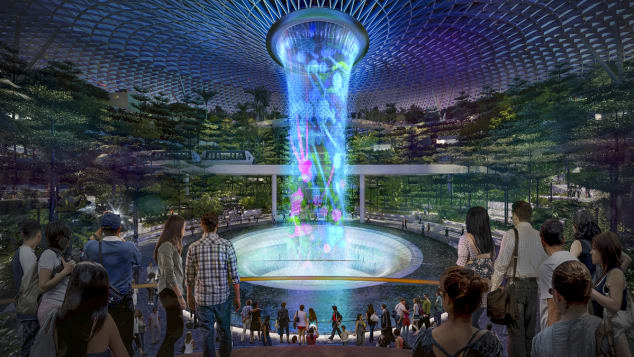 Rain Vortex: The Rain Vortex will be transformed by a light and sound show at night.

Best of the best

When Jewel Changi Airport opens, the transport hub will also be home to the world’s tallest indoor waterfall. 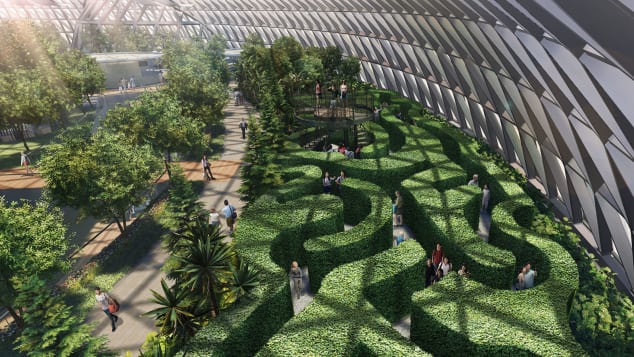 Mazes: There will be two mazes, both designed by famous maze designer Adrian Fisher — including the largest hedge maze in Singapore.
At number two on the list is Tokyo International Airport (Haneda), up one place from 2018. This hub also won World’s Best Domestic Airport and World’s Cleanest Airport.
Breaching the top three is Incheon International Airport, down one place from its second-place spot in 2018. Incheon remains a stalwart of the airport rankings, also nabbing an award for World’s Best Transit Airport.
New to the 2019 round-up is Narita International Airport, at number 9 — known for its quirky running track in Terminal 3.
Narita is one of three Japanese airports in the top 10 — Central Japan International Airport is the third, at number 6.
In fact, Asian airports dominate the rankings — with Hong Kong International Airport also getting a top spot at number five Frankfurt Airport, in Germany, dropped out of the top 10, after holding the number 10 spot for the past two years.
Changi Airport also nabbed the award for best airport hotel, thanks to its Crowne Plaza Changi Airport and its leisure facilitates also got recognized. 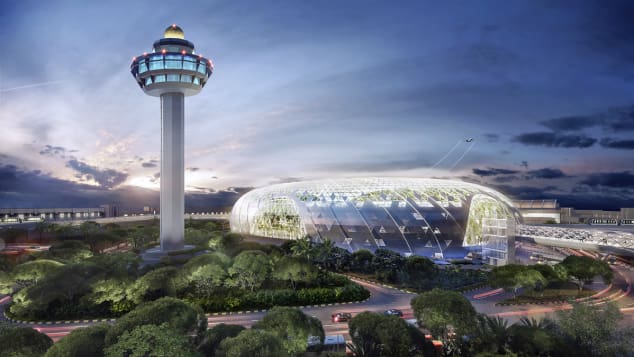 Exterior view: Jewel will have a total of 10 stories — five above ground and five below — filled with various attractions, gardens, 280 retail and F&B outlets and a 130-cabin YOTELAIR Singapore Changi Airport hotel.
Maybe next year, when Jewel Changi is up and running, it might stand a chance in the airport terminal rankings. For now, Heathrow Airport’s Terminal 5 takes that coveted award.
Qatar’s Hamad International Airport came in at number four on the list — it’s known for being silent and announcement-free, aside from Islamic calls to prayer made five times a day. Inside, it’s got some unusual airport art.
US airports didn’t rank highly in the awards stakes, but Houston Airports did get recognition for its website and digital services.
Zurich Airport was recognized for speedy passenger processing, while Hong Kong International Airport won for best airport dining.
Skytrax’s Plaisted said airports were improving across the board, largely spurred on by the threat of bad reviews.
“Everybody is now is quick to criticize, whether it’s on social media, whether it’s because you’ve been stuck at immigration or customs,” he told CNN Travel. “Airports are now much more savvy about customer complaints and realizing the damage that it can do to their reputation.”
He says more improvements are on the way thanks to automation, particularly when it comes to the amount of time we spend stuck in security lines or immigration.
“Basically this year, the last 12 months is about IT, biometrics, processing, how do you speed it up and make it easier for you to get through,” he says.
The reason, he says is largely driven by commercial interests rather than passenger welfare.
“They want you in the airport buying food, beverages, doing your shopping. Not standing in a 20-minute security queue. It’s always a double-edged sword.”

Egypt plans to promote tourism during World Cup in Qatar