The race to the top has just gotten tighter, with two rising mega-towers in the Middle East battling to become the world’s tallest.

Construction has now begun on The Tower at Dubai Creek Harbor, a vast waterfront development, with completion scheduled for ahead of Dubai’s Expo 2020 world fair, which kicks off in October that year. 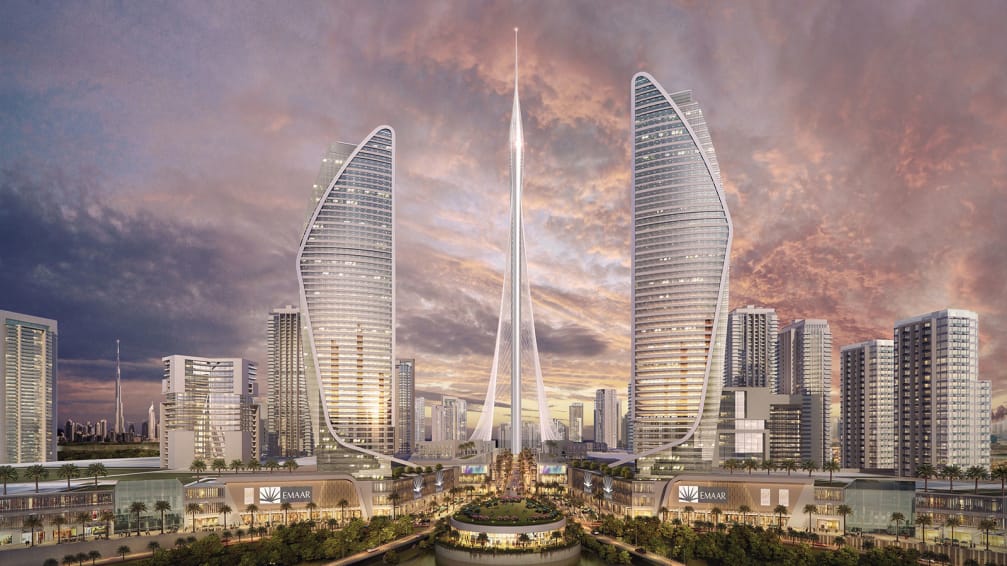 A new mega-tall skyscraper aims to be the tallest in the world, upon completion in 2020. “The Tower” will be built on the Dubai Creek Harbor, a massive new tourism development. The Tower will eclipse the Dubai’s Burj Khalifa — currently the tallest building in the world.
Height: 928m (3,044ft)
Architect: Santiago Calatrava

But it’s got competition. The Jeddah Tower, in Saudi Arabia, is also slated to finish in 2020.

When completed, this gleaming vertical will be 236ft (72m) taller than Dubai’s creation.

If The Tower in Dubai wants the world title, even for a short time, it has to open its doors before the Jeddah Tower. 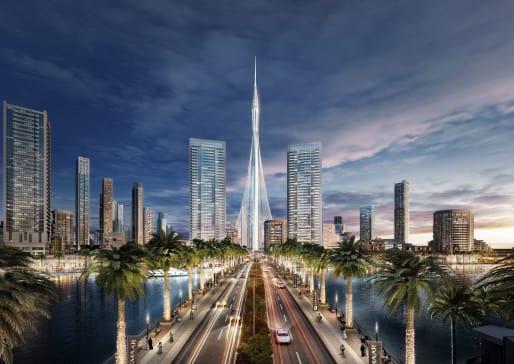 The Tower will be the heart of Dubai Creek Harbour, one of the largest tourist and lifestyle developments in the world stretching across 2.3 square miles (6 sqkm). Credit: Emaar Properties

Both of these towers are feats in modern engineering.

The Tower, in Dubai, is being constructed by Emaar, the real estate giant also behind the Burj Khalifa, and will anchor the Dubai Creek development, serving — developers hope — as a magnet for tourists.

Designed by Swiss-Spanish architect Santiago Calatrava Valls, it will feature The Pinnacle Room — an observation point offering 360-degree views of the emirate — and public vertical gardens, while 18 to 20 floors have been reserved for homes, restaurants, shops and a boutique hotel.

If construction runs to schedule, this $1 billion tower will have been thrown up in just three years.

The Jeddah Tower, in Saudi Arabia, will have taken a little longer. 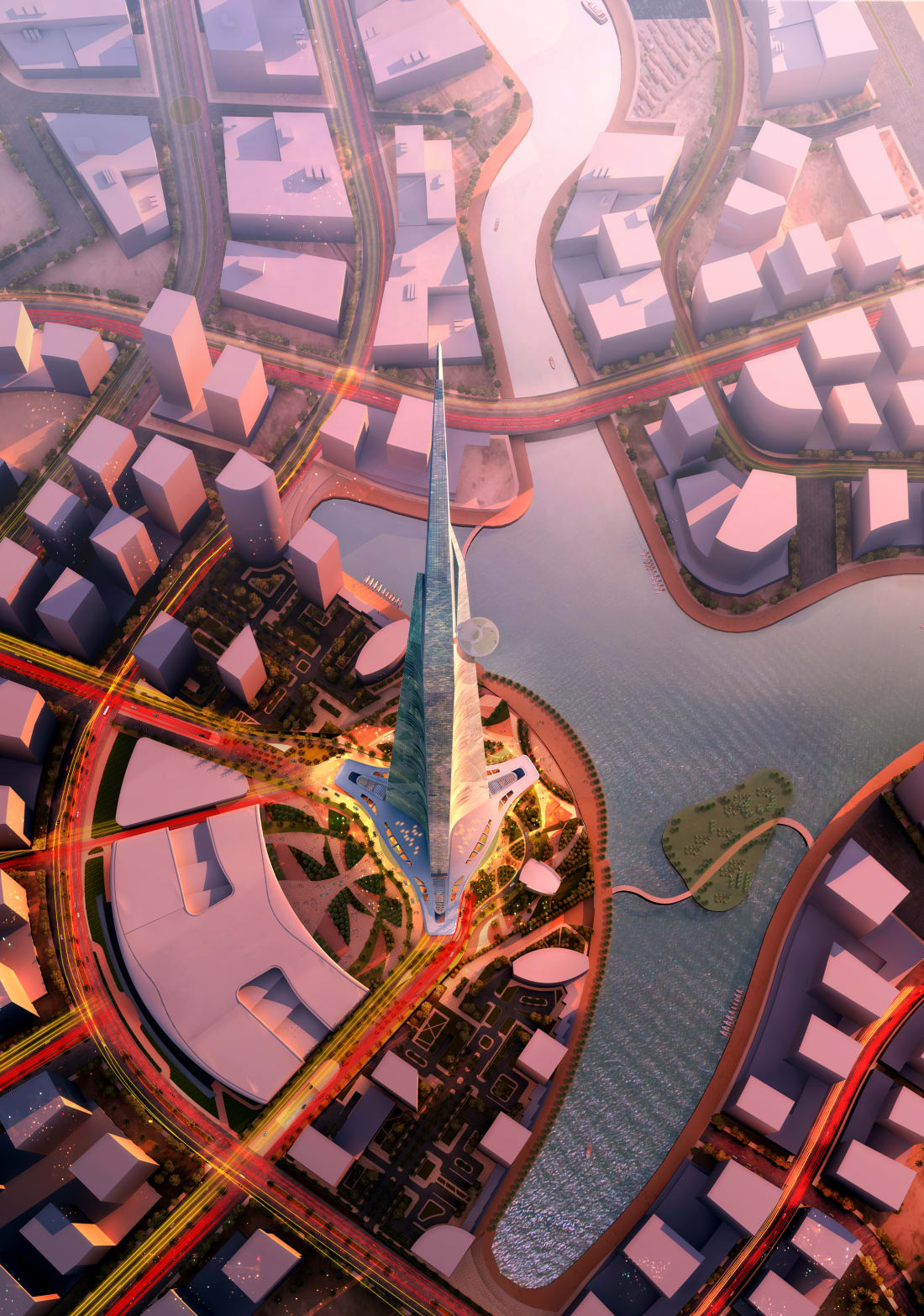 A threat to The Tower’s tallest tower ambitions is the Jeddah Tower in Saudi Arabia. This tower is currently under construction and due to top out at 1km at a cost of $1.23 billion.

Construction on this graceful arrow to the sky began on April 1, 2013, and was originally slated for completion in 2018, but its opening date has already been pushed back twice.

Constructing it will require about 5.7 million square feet of concrete and 80,000 tons of steel, according to the Saudi Gazette.

This $1.23 billion construction project is, however, already 40 floors off the ground, with 212 left to build — it’s undeniably farther along than the Dubai Tower.

But to think Dubai could finish first is not “as farfetched as it sounds”, according to Jason Gabel, communications manager for the  Council on Tall Buildings and Urban Habitat (CTBUH).

“The Dubai project is an observation tower, and therefore won’t require nearly as much lead time as a full-blown skyscraper,” Gabel tells CNN. “2020 is a real possibility for completion.”

Because less than 50% of The Tower’s height is occupied by usable floor space, it is defined by the CTBUH as a “supported tower” rather than a “building”. 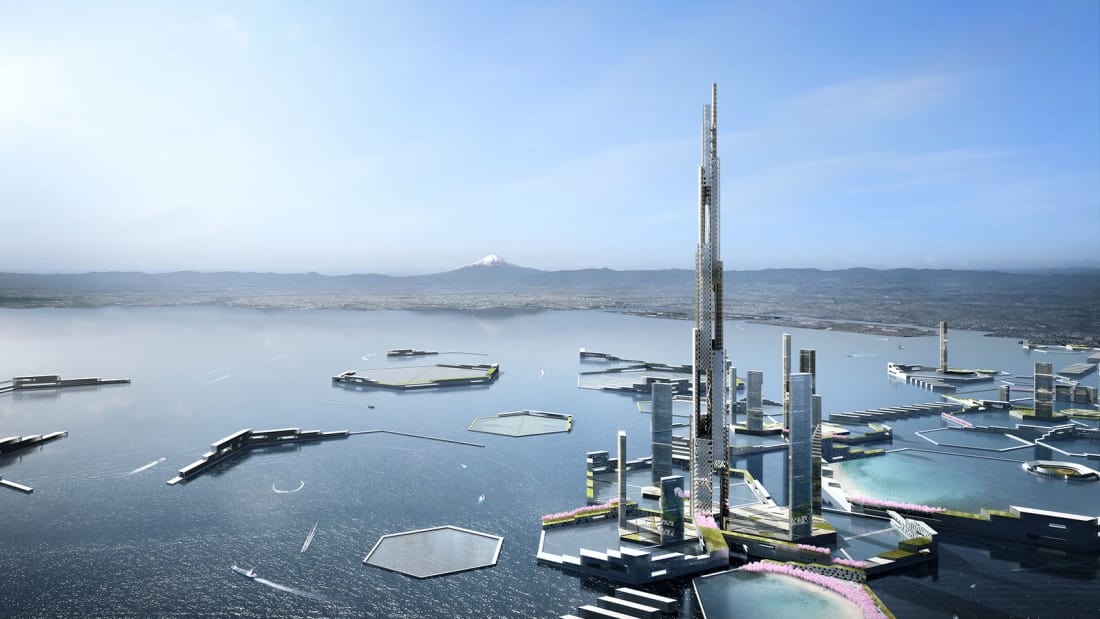 The power of a skyline

Home to more than 65 highrises over 656 feet (200m) tall and counting, Dubai has become synonymous with futuristic skyscrapers, and has been a pioneer of this in the Middle East.

“Historically, no Middle Eastern country has come close to building skyscrapers at the rate and height of the United Arab Emirates (UAE), but notable pockets of high-rise development are occurring in Qatar, Israel, and Saudi Arabia,” says Gabel. “The competitive situation we now see between Saudi Arabia and the UAE very unique.”

Dubai’s lofty intentions debuted in 1979, with the 39-story Dubai World Trade Center. It was the city’s first high rise, and the tallest building in the Middle East.

Subsequent iconic buildings, such as the Burj Khalifa and the Burj al-Arab, have given Dubai global notoriety. 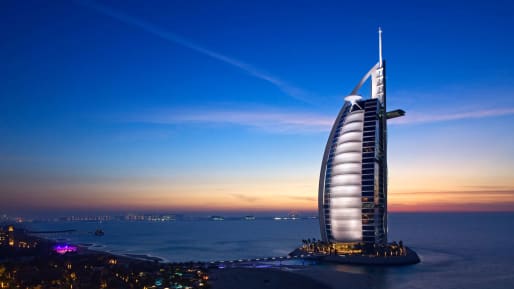 “Height produces iconicity and visibility on a global stage,” says Gabel, explaining why Dubai has focused on building big. “Visibility is itself an asset that can have a positive impact on real estate valuation, investment flows, tourism numbers, and public identity.

“Put simply, structures like this are very expensive upfront, but the benefits of having the ‘tallest’ are often worth the trouble — as was the case with the Burj Khalifa.”

Aric Chen, the design and architecture curator M+ visual culture museum in Hong Kong, tells CNN that for emerging economies a skyline can be a powerful communications tool.

“These soaring profiles are in many ways symbolic,” Chen tells CNN.

“Places like Dubai and, to some extent, places like China, are still trying to put themselves on the map and prove that they have arrived as modern global and technologically advanced nations.” The rapid speed at which Dubai can throw up a mega-tower has not, however, escaped criticism.

A series of fires in the past few years, including a blaze that tore through a luxury skyscraper on the Palm Jumeirah artificial island in Dubai this month — have called into question the quality of some towers, and their fire-proofing.

“Super tall buildings are not unproblematic and there are safety concerns,” says Chen.
Valls, however, is confident that The Tower will not succumb to such issues.

“Extensive studies were undertaken in preparation for the ground breaking, and the learning that we have gained from the experience will add to the knowledge base of mankind,” he said in a statement. 432 Park Avenue in New York, the tallest all-residential tower in the western hemisphere opened its doors in December 2015, recently became the hundredth supertall building in the world.

Developers have installed multiple damper and shock absorption systems throughout the building, to ensure its stability.

They also completed a series of wind tunnel, climate and seismic tests analyzing 12 scenarios across varying heights to check the behavior of the building under stressful conditions.

“We need to have a balanced and careful look at skyscrapers,” says Chen. “But they do serve to again push technologies, and push what’s possible.

“We can certainly learn from that experimentation.”

Written by By Kate Springer, CNN