They call themselves “students” ― that’s the verbatim translation of the word “Taliban” from Pashto. Today, the name of the Islamist militant movement doesn’t conjure up images of men and women bent over books, though, but rather of terror and destruction.

After the Taliban completed their take-over of Afghanistan on Sunday by capturing the capital Kabul and moving into the presidential palace, hundreds of civilians stormed the tarmac of Kabul’s airport in a panic. They tried to get onto the few military planes that were still taking off, so desperate were they to escape a country that is now once again under Taliban rule.

Who is this ultraconservative group that inspires so much fear in Afghanistan and beyond? Read on for an overview. And a heads-up: When using “the Taliban” in this article, we’re referring to the Afghan Taliban, not their Pakistani counterpart.

There’s a clear hierarchy within the Islamist group. Mawlawi Hibatullah Akhundzada has been the group’s supreme leader since 2016. The religious scholar is the ultimate authority in all political, religious and military affairs. He is supported by three deputies and a number of ministers who oversee areas such as military, intelligence and economy. The “Rahbari Shura,” also known as the “Quetta Shura,” is the group’s highest advisory authority and consists of 26 members.

The political branch of the Taliban that represents the group internationally is based in Doha, Qatar. It is led by Taliban co-founder Mullah Abdul Ghani Baradar. This subset of the group is the one that has handled peace negotiations with the US, for example (more on that below), with Mullah Abdul Hakim at the head of the negotiating table. 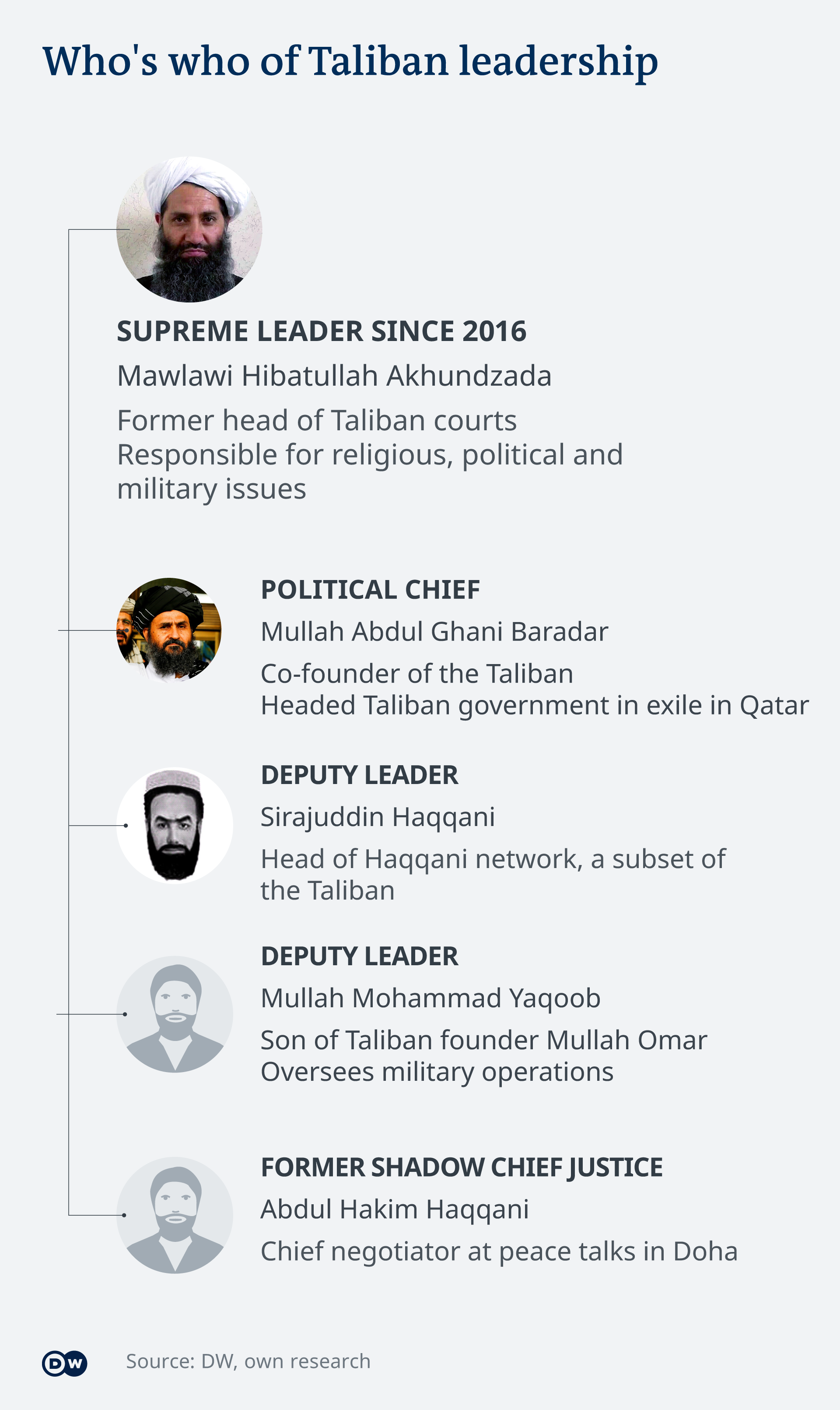 The militant group makes a lot of money with the export of opium and heroin. The UN estimates that in 2018 and 2019 alone, the Taliban made more than $400 million (€340 million) through the illicit drugs trade, which accounts for up to 60 percent of the group’s income according to US officials. Additional sources of income that were listed in a report by Hanif Sufizada, an economic policy analyst at the Center for Afghanistan Studies, include mining, taxes and donations. Some countries are also thought to funnel money directly to the Taliban.

“They [the Taliban] have two allies,” Guido Steinberg, from the German Institute for International and Security Affairs (SWP), told DW. “One is quite an unlikely ally: That’s Iran. The Revolutionary Guards have supported the Taliban in recent years in order to beat the Americans. But most importantly it’s Pakistan. Pakistan is fighting with the Taliban.” 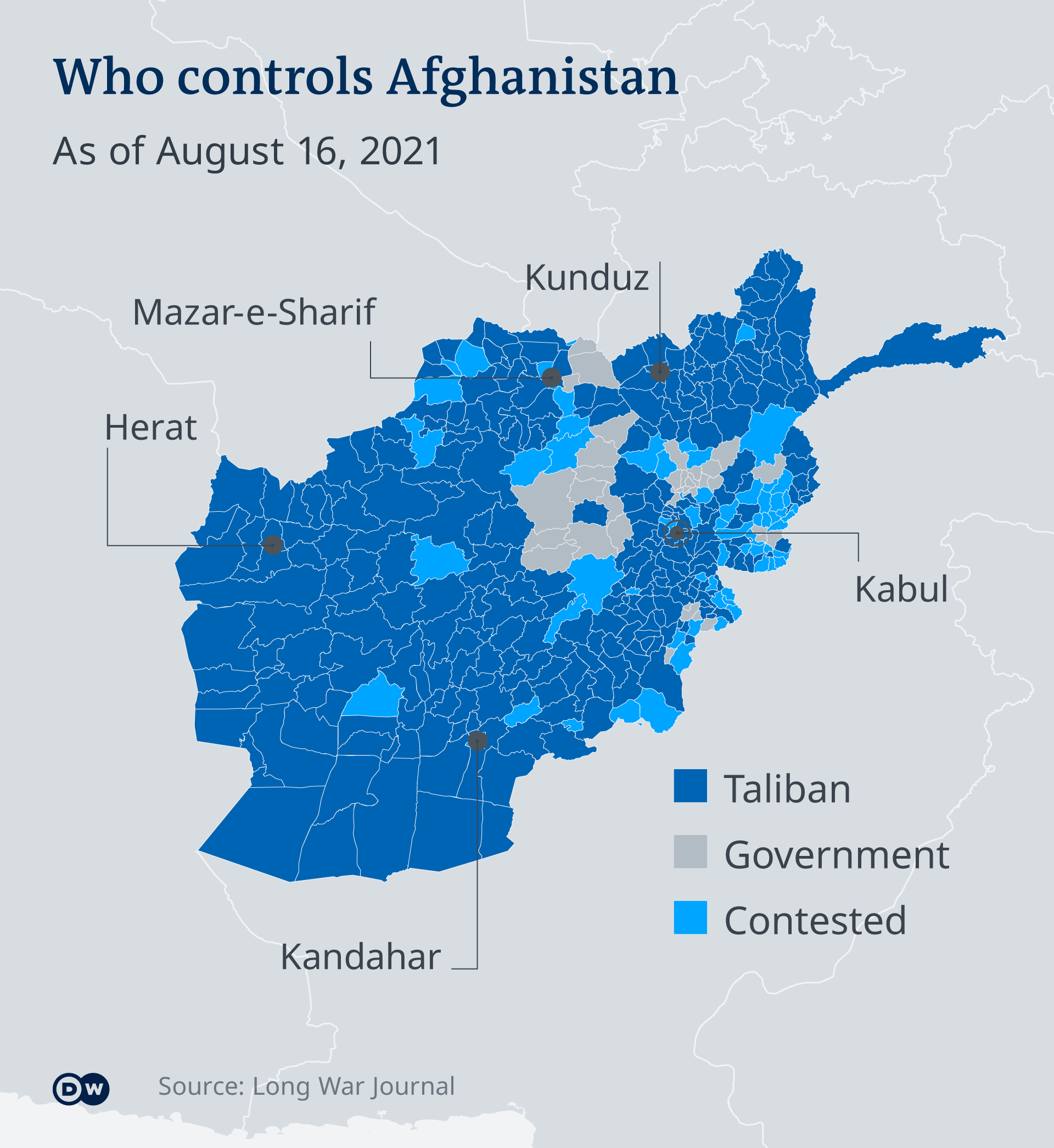 The Taliban emerged from a brutal civil war in Afghanistan that followed the Soviet Union’s withdrawal from the country. While the group was officially formed in 1994, many of its fighters previously fought the occupying Soviet forces, an endeavor that was covertly supported by the CIA. The name Taliban is thought to come from the fact that many members used to be students at Afghan and Pakistani madrassas, or religious schools. The ones that future Taliban fighters attended are thought to have preached an extreme form of Sunni Islam.

Mullah Mohammed Omar, who would become the founder of the Afghan Taliban, was disappointed that Islamic law hadn’t been instated in his country after the end of the Soviet occupation. He gathered 50 students and together the group vowed to rid Afghanistan of warlords and criminals and to restore order, peace and security in the war-torn country. The group quickly grew, with support from Pakistan, and began taking over cities and provinces. They were popular because they stamped out corruption and made areas where they gained power safe for commerce again.

In 1996, they took Kabul and overthrew the government. By 1998, the Taliban regime controlled 90% of Afghanistan. 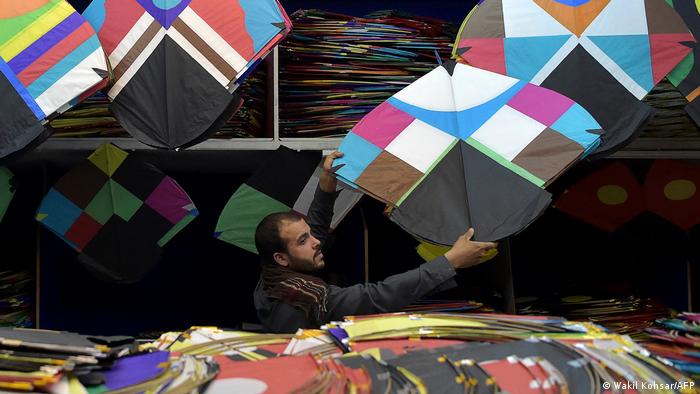 But the reign of the Taliban didn’t just bring safer trading. The Islamist group’s ideology is based on Salafism, a radical form of Islam. Once in power, the Taliban enforced strict Sharia law that curbed human rights and was particularly harsh on girls and women.

From the age of 10, girls weren’t allowed to go to school anymore and women had to wear a burqa, a garment that covered them from head to toe. They were banned from driving under penalty of death and couldn’t go out in public without a male escort such as a husband or brother. Television, music and movie theaters were banned for everyone. Murderers and adulterers were publicly executed, theft was punished by amputation.

Experts warn that the Taliban haven’t changed their approach. “Reports coming out of Kandahar and other regions that have been occupied already in the past weeks sound like they’re not promising,” Jessica Berlin, a US political analyst on Afghanistan, told DW. “We have no particular reason to believe they have become any more humanitarian-minded.”

End of the first Taliban reign

The international community treated Afghanistan under the Taliban as a pariah state because of human rights violations, still they didn’t intervene until after the terrorist attacks of September 11, 2001. Osama bin Laden, who, with his al-Qaeda network, orchestrated the attacks that killed almost 3,000 people in the US, had found a safe harbor in Afghanistan. When the Taliban refused to hand bin Laden over, the US attacked Afghanistan and eventually toppled the Islamist government.

In 2018, the US began directly negotiating a peace treaty with the Taliban —  without involving the elected Afghan government. Intra-Afghan peace talks between the government and the Taliban began in September 2020, but soon stalled.

When US President Joe Biden announced in April 2021 that US and NATO troops would be withdrawn by September 11 of the same year, critics were concerned about the fast pace at which troops were being withdrawn, fearing Afghanistan would be thrown into disarray and that the democratically elected Afghan government wouldn’t be able to maintain its hold on to power.