The ominous, low grumble of a bomber, slowly and methodically patrolling the vast skies above, ushers in the Iraqi soldier’s final moments. His fate is emphasized by the dissipating daylight. The barren expanse of land surrounding the soldier and the tree to which he is tied offers no recourse. As the sun bids its final farewell, the noose is tightened around the soldier’s neck. The bodies of several men with identical fates lay scattered below.

“This is the fate of those who betray their country and run from battle,” says an onlooker with commanding and composed intonation.

Thus begins “The Quarter of Scarecrows,” an Iraqi entry in the 34th annual Cairo International Film Festival. Directed by Hassan Ali Mahmoud, the film is an hour-long expose of the travails of life in Iraq during the notoriously deadly eight-year Iran-Iraq war of the 1980s.

The allegorical film depicts those hardships through a story told in an agrarian Iraqi community near the country’s eastern border. The feudal lord of the village, Miran, oversees his fiefdom with an iron fist and equally fierce lack of compassion. He forcibly evacuates villagers to make room for wheat storage and conscripts children into field labor.

But all is not well for Miran. The man is vexed by a flock of scarecrows that refuse at all costs to vacate the agricultural fields surrounding the village. Miran employs women to make outfits to clothe dozens of scarecrows. The figures are erected in the fields but fail to deter the crows.

Miran then appoints a local man to do the trick but not before issuing an ultimatum. “I’ll bury you if you don’t get rid of those crows by tomorrow!” he bellows.

The man works tirelessly to fulfill his mandate. He chases the crows around the fields until he reaches delusion. The scarecrows take on ghastly, ashen countenances. The man then begins tearing them to shreds.

“Why are you destroying the scarecrows, you scarecrow?” Miran clamors, as the man kisses his feet. “I’ll uproot your eyes out! You are a beast!”

But Miran spares the man’s life and moves on to alternatives. Battle-hardened soldiers, wielding automatic weapons, are brought to discharge their ammunition on the crows. It doesn’t work.

Children patrol the fields with cans full of rocks in hopes of disturbing the crows to the point of retreat. The children, however, are exhausted and underpaid–one is killed by a landmine when he tries to escape–and the crows remain.

Soon, nature and the supernatural take over. A windstorm destroys all the scarecrows. The soldiers fade into the bodily forms of scarecrows and villagers disappear, leaving behind only sketched images of scarecrows on mud walls as an ominous instrumental soundtrack plays, and the flock of crows circles the village, emitting their painful pitches.

“The Quarter of Scarecrows” is no masterpiece. The would-be disturbing film lacks one fundamental ingredient–fear–and the only laughter is lukewarm, the result of cheap slapstick.

It was also difficult to follow. No context was given to the events. For a non-Arabic speaker, it was particularly difficult to figure out what was being said due to the poor translations, and the yellow subtitles set against the earth tones of the setting did not help.

But the film has some merit, mostly stemming from its use of plot as a prism. Mahmoud effectively portrays the consummate destruction of the innocent in wartime. In the end, all is lost. No one can evade the brutal hand of the ever-returning threat. 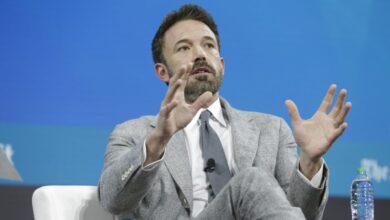