The World Economic Forum’s Global Risks Report has warned about deeply interconnected global risks for the past 17 years. According to the World Economic Forum’s Global Risks Report 2023, conflict and geoeconomic tensions have triggered a series of deeply interconnected global risks. These comprise energy and food supply shortages, which are expected to last for the next two years, as well as significant hikes in the cost of living and debt payments. Simultaneously, these crises risk undermining efforts to address longer-term risks, particularly those related to climate change, biodiversity, and human capital investment.

The “cost of living crisis” is ranked as the most serious global risk over the next two years, with a short-term peak. “Biodiversity loss and ecosystem collapse” is regarded as one of the most rapidly declining threats over the next decade, and all six environmental risks are ranked among the top ten risks for the next decade.

Nine risks are spotlighted in the top 10 rankings over both the short and the long term, including “Geoeconomic confrontation” and “Erosion of social cohesion and societal polarization”, alongside two new inductees to the top rankings: “Widespread cybercrime and cyber insecurity” and “Large-scale involuntary migration”.

According to the insights of the Global Risks Report 2023, if countries across the globe do not take collaborative action, the most long-term threats will eventually reach a critical point.

As economic pressures keep reducing the middle-income bracket, associated social unrest and political instability will spread beyond developing markets. Citizen dissatisfaction with human development losses and reduction in social mobility, combined with a growing divide in values and equality, constitute a serious threat to political regimes all over the globe.

The election of less centrist leaders, as well as political polarization between economic superpowers over the next couple of years, could minimize room for cooperative problem-solving even further, dividing alliances and resulting in a more turbulent dynamic.

The current global pandemic and war in Europe have resurrected energy, inflation, food, and security crises. These generate the following risks, which will dominate the next two years: the risk of recession; growing debt distress; a continuation of the cost of living crisis; polarized societies enabled by fake news; a pause in rapid climate action; and zero-sum geo-economic warfare.

Unless the world begins to team up more efficiently on climate mitigation and adaptation, continued global warming and ecological breakdown will occur over the next decade. Five of the top ten risks are failure to reduce and cope with climate change, natural disasters, biodiversity loss, and environmental degradation, with biodiversity loss considered to be one of the fastest deteriorating global threats over the next ten years.

One of the main targets of tougher industrial regulations and greater governmental intervention will be the technology sector. Over the next ten years, research and development into future technologies will proceed at a rapid clip, fueled by governmental funding, military spending, and private investment, leading to improvements in, among other things, AI, quantum computing, and biotechnology.

These technologies will offer only partial solutions to a number of future challenges for those nations with the financial wherewithal, from addressing new health concerns and a shortage of healthcare capacity to scaling up food security and climate mitigation. There will be a rise in inequality and divergence for those who cannot. These technologies pose vulnerabilities in every economy, including the spread of false information and disinformation as well as the uncontrollably high turnover of both blue-collar and white-collar occupations.

Nevertheless, the quick creation and adoption of innovative technologies, which frequently come with rudimentary rules governing their application, comes with its own set of dangers. People are more vulnerable to domestic dangers, such as those that aim to disrupt social functioning, as a result of the ever-increasing integration of technologies with society’s essential functions. Attacks against essential technology-enabled resources and services, including agriculture and water, financial institutions, public security, transportation, energy, and domestic, space-based, and undersea communication infrastructure, are projected to increase as well as an increase in cybercrime. 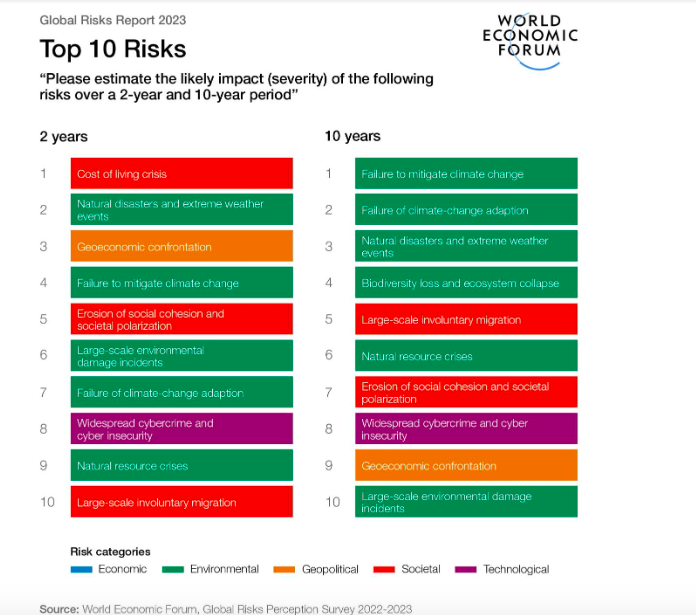 Challenging trade-offs for governments faced with competing societal, environmental, and security concerns will soon be introduced. Short-term geoeconomic hazards are already placing net-zero commitments to the test, exposing a gap between what is scientifically crucial and politically acceptable. In an effort to limit the consequences of a warming world, countries should partner up in regards to the climate crisis which is dramatically accelerated.

For the time being, security concerns and rising military spending may end up leaving less fiscal room to absorb the effect of the ramifications of a prolonged cost-of-living crisis. Vulnerable countries are in dire need of a change in course, otherwise they may find themselves in a perpetual state of crisis, incapable of making investments in future growth, human development, and green technologies.

The report urges leaders to work hand-in-hand, while aligning short- and long-term perspectives. In addition to pressing climate policy, the report advocates for international cooperation as well as public-private partnerships to enhance economic security, technology governance, economic development, and investment in research, science, education, and health.

To sum up, four possible futures are focused on in the report, namely food, water, metals, and mineral scarcities, all of which could stimulate a humanitarian as well as an ecological crisis, ranging from water wars and famines to persistent overexploitation of natural assets and a slowing in climate mitigation and adaptation.

Similar foresight exercises might assist foresee potential links, guiding preparatory actions towards decreasing the extent and scope of polycrisis prior to their happening, given the unclear interconnections between global hazards.

“The short-term risk landscape is dominated by energy, food, debt and disasters. Those that are already the most vulnerable are suffering – and in the face of multiple crises, those who qualify as vulnerable are rapidly expanding, in rich and poor countries alike. In this already toxic mix of known and rising global risks, a new shock event, from a new military conflict to a new virus, could become unmanageable. Climate and human development therefore must be at the core of concerns of global leaders to boost resilience against future shocks,” said Saadia Zahidi, Managing Director, World Economic Forum.

John Scott, Head of Sustainability Risk, Zurich Insurance Group, said: “The interplay between climate change impacts, biodiversity loss, food security and natural resource consumption is a dangerous cocktail. Without significant policy change or investments, this mix will accelerate ecosystem collapse, threaten food supplies, amplify the impacts of natural disasters and limit further climate mitigation progress. If we speed up action, there is still an opportunity by the end of the decade to achieve a 1.5ᵒC degree trajectory and address the nature emergency. Recent progress in the deployment of renewable energy technologies and electric vehicles gives us good reasons to be optimistic.”

Carolina Klint, Risk Management Leader, Continental Europe, Marsh, said: “2023 is set to be marked by increased risks related to food, energy, raw materials and cyber security, causing further disruption to global supply chains and impacting investment decisions. At a time when countries and organizations should be stepping up resilience efforts, economic headwinds will constrain their ability to do so. Faced with the most difficult geo-economic conditions in a generation, companies should focus not just on navigating near-term concerns but also on developing strategies that will position them well for longer-term risks and structural change.”

The Global Risks Report is a component of the Forum’s Global Risks Initiative, which seeks to foster a better understanding of short-, medium-, and long-term global risks in a bid to facilitate risk preparedness and resilience learning. The report also looks at how current and future threats can engage to form a “polycrisis” – a cluster of relevant global risks with exacerbating implications and unforeseeable outcomes.