From Botswana diamonds to Netherlands coffee, a new intriguing data map of the world was released showing what each country is famous for according to researches and statistics.

The data map was released by data journalist and information designer David McCandless along with supporting sources from Forbes magazine, the World Bank, Bloomberg, Reuters, the CIA and others.

The map divided the countries of the world into several categories including: commodity, psychology, ecology, gastronomy, economy, humanity, technology and Nasty things, for which McCandless gave a black colour.

Each country is famous for something that distinguishes it from all others. 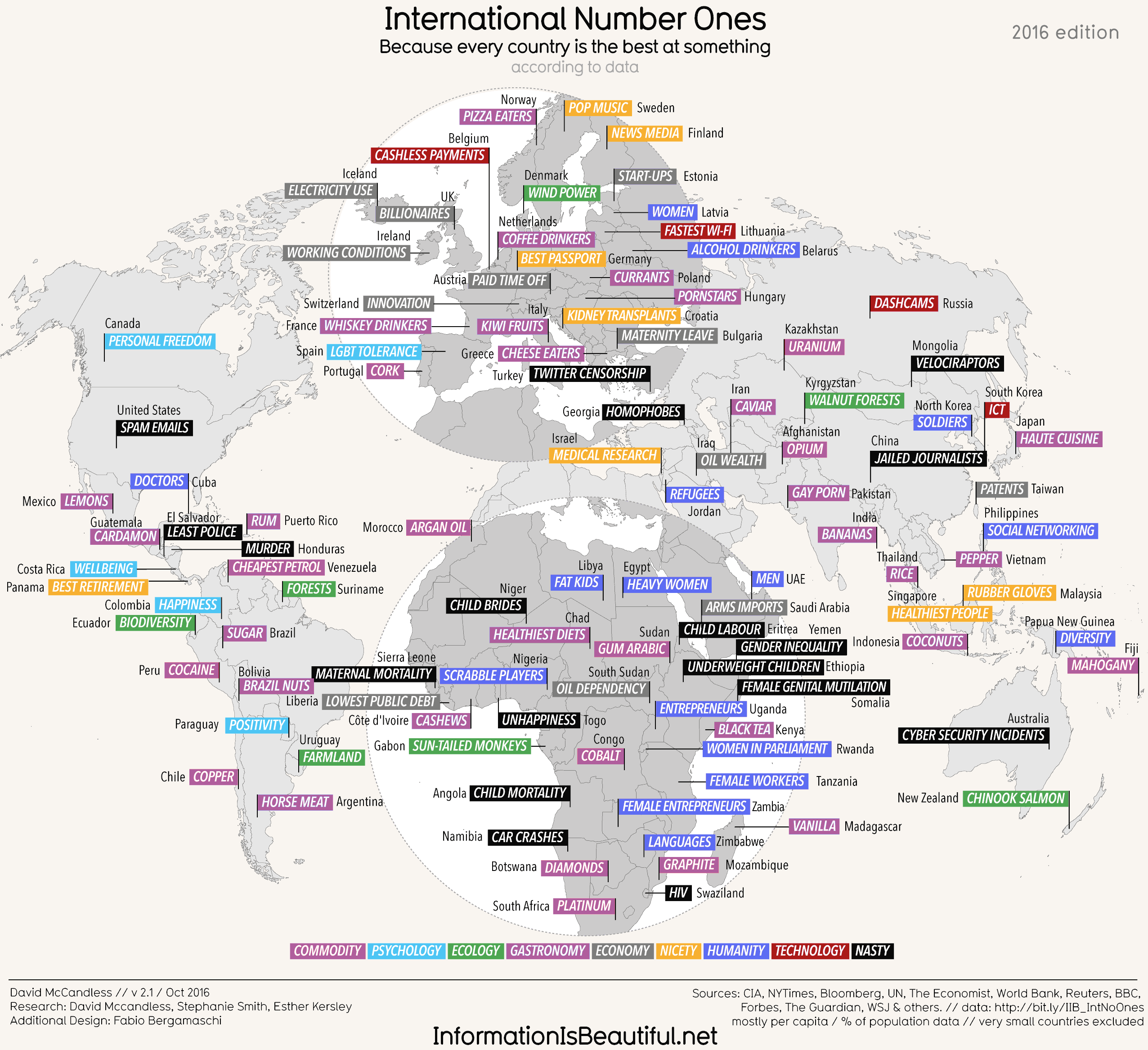 Egypt is famous for 'obese ladies' as, according to a survey conducted by the Ministry of Health in January 2016, Egyptian women are fat: 75 percent of them aged from 15 to 59 years suffer from overweight and obesity, compared to 61 percent of Egyptian men.

The map showed that the UKA is tops for number of men, meaning it has the most men per 100 women. According to Emirati statistics, the number of men in the country is three times the number of women, which is considered the second highest percentage in the world after Qatar.

While Saudi Arabia is the country that imports the most weapons in the world, as its purchases jumped by 50 percent last year, reaching US$9.3 billion, according to estimates.

Morocco is the place to go for Argan oil, as the increasing popularity of this oil has prompted the Moroccan government to plan for increased production, from around 2,500 tons last year to 4,000 tons by 2020.

Meanwhile, Turkey is famous for blocking "Twitter"; last year, Turkey decided to withhold the social networking site, alleging that it created unnecessary panic among citizens at the time of the explosions.

Moreover childhood obesity is highest in Libya according to the World Health Organization. It found that the North African region has the highest proportion of children who suffer obesity, of whom 22.4 percent are in Libya.

The map showed that Yemen is the country that suffer gender inequality.

On the other hand, the map said that the top medical research goes to Israel as the country spends 4.2 percent of its GDP on the scientific research. While Paraguay is famous for positivity and surprisingly Rwanda is top for women in the parliament.

While china won the most country with jailed journalists, as according to committee to protect journalists, China is the world’s worst offender, imprisoning 49 journalists in 2015 which is a record for that country.

While on the contrary if you are seeking a country that gives you most personal freedom, you should visit Canada; Canada won the top spot in personal freedom, according to an annual global prosperity index ranking by the Legatum Institute.

The United States is famous for the spam emails, according to reports in 2014. The US sends more spam by volume than any other country in the world.

Speaking to the Biritish newspaper "The Independent", McCandless said "it took three weeks of solid work to complete the map," a process that required "roving news articles, rifling big databanks (UN, World Bank, CIA World Factbook) and doing specific Google searches."
He added: “Where there were multiple options for some countries, we chose the most interesting or entertaining possibility — and kept the alternatives in the datasheet."
Tags
Data Journalist David McCandless Egypt map obesity