Visitors to the town of Hawamdiya in Giza Governorate might stand on the banks of the Nile River and admire its beauty, but for Hawamdiya residents, the river is a source of sorrow.

Many in Hawamdiya believe that the Nile, which is polluted with industrial waste, is causing diseases among their community.

In a bid to overcome the pollution problem, some inhabitants send their kids to water taps attached to the medical compound of Hawamdiya Sugar Company in order to get water for drinking and cooking. Others managed to buy filters to save the burden of looking for a clean place. Some unlucky residents have to buy their water in jerrycans for 75 piastres each.

Sabry Mohamed, who owns a koshary restaurant, wakes up every day with nothing on his mind but how to get water from anywhere other than the taps in his house. Mohamed, like many Hawamdiya residents, says that the tap water is yellow in color and smells bad.

The only thing he and other restaurant owners can do is use the few faucets that are known to give clean water. Otherwise, he won’t be able to cook.

"It is difficult to use a filter here in the restaurant, we are trying to use water taps less frequently. We seek cleaner water from the neighboring areas,” he says.

For Aliya Mohamed, another resident of Hawamdiya, the unclean water is a constant source of anguish. "We are too scared to go to hospitals or deal with doctors," she says.

"We endure the pain no matter how severe, because we do not want to know what is wrong with us, as we are certain we suffer many diseases due to the unclean water."

Water is not the only dilemma facing the citizens of Hawamdiya. Some are also deprived of proper sewage disposal, forcing them to keep private rooms for drainage inside their houses. "We pay LE45 a month in order to drain out the sewage water twice and prevent it from spreading in the house," says Mohsena Mohamed.

But the problems of Hawamdiya residents don’t end there. There is also a problem with houses collapsing due to underground water causing cracks and land-slides. Yehya Saad, who lives in Hawamdiya, says, "We were surprised with a landslide in the spot next to my house, with a steam of water bursting out and almost drowning passersby. We found that it was caused by a break in the street’s main water pipe, which led to a steep inclination in more than five houses, and leaving ten families displaced."

Saad says that he and his children did not even get to enjoy Eid el-Adha because he had to rent a room for his family, which includes three newborns. He wonders when that situation will end.

Ibrahim Abdel Karim, a carpenter, spoke about the deteriorating conditions in the town, saying that piles of garbage inundate the streets and the roadsby which kids go to school remain unpaved.

Hawamdiya’s representative in parliament, Gamal Qurany, stated that the head of the town’s potable water company assured him that all the pipes will be changed, as they are made from Asbestos, which is internationally banned and causes many problems in the water.

The world is creating more single-use plastic waste than ever, report finds 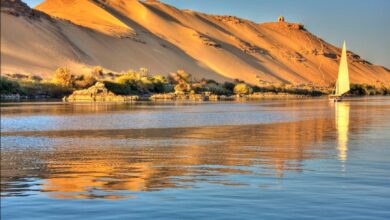 Egypt is one of the most drought-prone countries in the world, minister