As the diesel generator rumbles to life in the heart of the Amazon rainforest, teenagers scramble to charge their phones and watch music videos — an ordinary pastime in an extraordinary setting.

The teens are members of the Arara indigenous group — and they had to travel eight hours round-trip by boat to the nearest city, Altamira, to download those video clips.

They live with about 200 others in Laranjal village on the edge of the Iriri River in Brazil’s northern state of Para.

On a daily basis, they are isolated and off the grid. They are also part of an 800,000-strong indigenous community that Brazilian President Jair Bolsonaro says he wants to “integrate into society.”

“The Indian cannot continue to be trapped within a demarcated area as if he were a zoo animal,” he once said.

“My plan is to make Indians our equals,” the far-right leader said in December, a month before taking power.

“They have the same needs as us — they want doctors, dentists, television, internet.”

AFP / Mauro Pimentel The Arara are worried that Brazilian President Jair Bolsonaro’s plan to “integrate” them into mainstream society will ruin their traditional way of life — here, a man heads on a walk to collect bananas in Laranjal village


Bolsonaro’s remarks have alarmed the Arara, who like other indigenous groups across Latin America’s biggest country of 209 million people have long battled to protect their traditional way of life, away from towns and cities.

Their fears have been heightened by the uptick in illegal logging since the arrival of the new Brazilian leader — and what that means for their land.

“Bolsonaro wants the Indians to live like the whites, but we will never give up our customs,” says Mouko, 43, wearing a T-shirt and shorts.

“We live on fishing and hunting. We must preserve nature and stop tearing down the trees.”

Thousands of indigenous people converged Wednesday on the nation’s capital Brasilia at the start of their annual three-day lobbying effort to defend their land rights.

The Arara live in single-story wooden houses, many of them painted blue, that form an almost perfect arc around a well-used grass football pitch.

Roosters and hens roam freely around the homes, which were built by the company managing the nearby Belo Monte hydroelectric power plant as compensation for environmental damage to their ancestral lands.

While they enjoy some of the trappings of modern life, the Arara say they are fiercely attached to their traditional culture.

Some decorate their faces and bodies with motifs inspired by local plants or animals using pigments extracted from jenipapo fruit.


Unlike residents of many indigenous villages in Brazil, everyone in Laranjal can speak their ancestral language. Some of the elders even refuse to use Portuguese, the mother tongue of Brazil’s colonizers.

Children’s names and birth dates written on colored paper decorate the walls of the four classrooms in the school that goes up to the seventh grade (about age 12).

“Young Indian people are not very different from other children,” said teacher Janete Carvalho, 35, as she prepared for the new academic year.

“They are usually very good at math and love art classes.”

Sickness and the city

A concrete dispensary offering basic health care is staffed by nurse Karina Silva Marcal, who does two-month rotations in Laranjal.

“The worst scourge is the flu,” says Marcal.

“When they go into town, they often come back sick and if we don’t pay attention to it, the whole village is infected.”


The local supermarket? It’s the rainforest, where Arara men hunt wild animals, including pigs and monkeys, and catch fish in the river for their wives to cook.

“I don’t like spending too much time in the city — there are too many diseases,” says Munenden, 23, as his wife prepares a meal of cassava, corn and fish.

“I only go when it’s necessary.”

Brazil sees record Amazon deforestation in first half of 2022 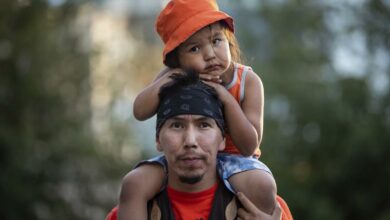 Report: Over 600 bodies found at Indigenous school in Canada