The price Mosul’s residents paid in blood to see their city freed was 9,000 to 11,000 dead, a civilian casualty rate nearly 10 times higher than what has been previously reported. The number killed in the nine-month battle to liberate the city from the Islamic State group marauders has not been acknowledged by the US-led coalition, the Iraqi government or the self-styled caliphate.

But Mosul’s gravediggers, its morgue workers and the volunteers who retrieve bodies from the city’s rubble are keeping count.

Iraqi or coalition forces are responsible for at least 3,200 civilian deaths from airstrikes, artillery fire or mortar rounds between October 2016 and the fall of the Islamic State group in July 2017, according to an Associated Press investigation that cross-referenced independent databases from non-governmental organizations. 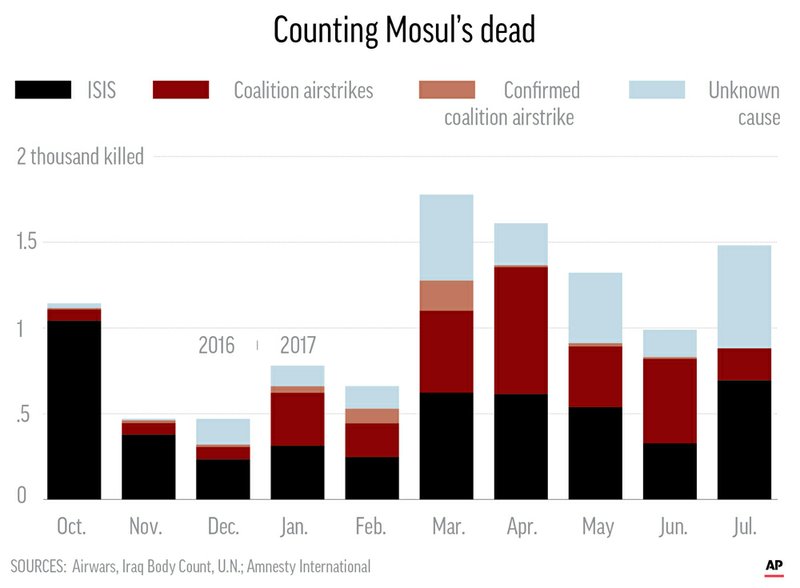 Most of those victims are simply described as “crushed” in health ministry reports.

The coalition, which says it lacks the resources to send investigators into Mosul, acknowledges responsibility for only 326 of the deaths.

“It was the biggest assault on a city in a couple of generations, all told. And thousands died,” said Chris Woods, head of Airwars , an independent organization that documents air and artillery strikes in Iraq and Syria and shared its database with the AP.

“There doesn’t seem to be any disagreement about that, except from the federal government and the coalition. And understanding how those civilians died, and obviously ISIS played a big part in that as well, could help save a lot of lives the next time something like this has to happen. And the disinterest in any sort of investigation is very disheartening,” Woods said, using an alternative acronym for the Islamic State group.

In addition to the Airwars database, the AP analyzed information from Amnesty International , Iraq Body Count and a United Nations report. The AP also obtained a list of 9,606 people killed during the operation from Mosul’s morgue. Hundreds of dead civilians are believed to still be buried in the rubble.

Of the nearly 10,000 deaths the AP found, around a third of the casualties died in bombardments by the US-led coalition or Iraqi forces, the AP analysis found. Another third of the dead were killed in the Islamic State group’s final frenzy of violence. And it could not be determined which side was responsible for the deaths of the remainder, who were cowering in neighborhoods battered by airstrikes, IS explosives and mortar rounds from all sides.

But the morgue total would be many times higher than official tolls. Iraqi Prime Minister Haidar al-Abadi told the AP that 1,260 civilians were killed in the fighting. The US-led coalition has not offered an overall figure. The coalition relies on drone footage, video from cameras mounted on weapons systems and pilot observations. Its investigators have neither visited the morgue nor requested its data. 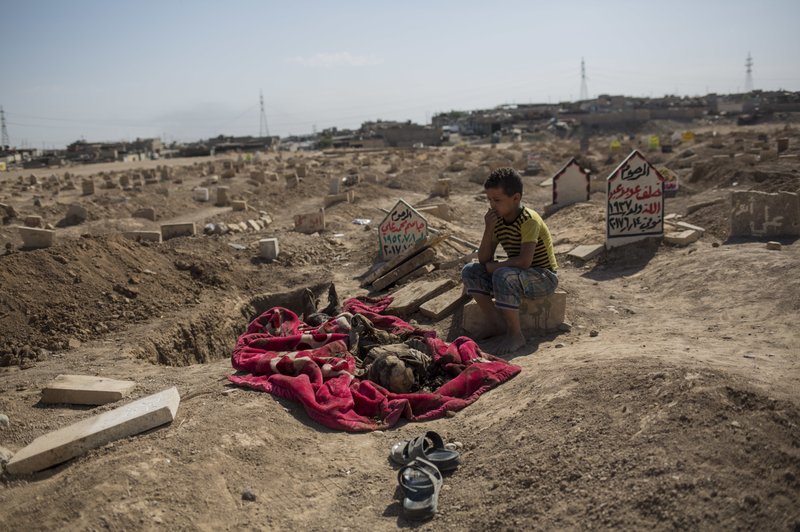 What is clear from the tallies is that as coalition and Iraqi government forces increased their pace, civilians were dying in ever higher numbers at the hands of their liberators: from 20 the week the operation began in mid-October 2016 to 303 in a single week at the end of June 2017, according to the AP tally.

Abdel-Hafiz Mohammed, who kept his job as undertaker throughout the militants’ rule, has carved approximately 2,000 headstones for the al-Jadidah graveyard since October 2016.

After the city fell to IS in 2014, undertakers like him handled the victims of beheadings and stonings; there were men accused of homosexuality who had been flung from rooftops. But once the operation to free the city started, the scope of Mohammed’s work changed yet again.

“Now I carve stones for entire families,” Mohammed said, gesturing to a stack of four headstones, all bearing the same name. “It’s a single family, all killed in an airstrike.”

Dying at home, on the front

Mosul was home to more than a million civilians before the fight to retake it from IS. Fearing a massive humanitarian crisis, the Iraqi government dropped leaflets or had soldiers tell families to stay put as the final battle loomed in late 2016.

When Iraqi forces became bogged down in late December, the Pentagon adjusted the rules regarding the use of airpower, allowing airstrikes to be called in by more ground commanders with less chain-of-command oversight.

At the same time, Islamic State group fighters took thousands of civilians with them in their retreat west. They packed hundreds of families into schools and government buildings, sometimes shunting civilians through tunnels from one fighting position to another.

They expected the tactic would dissuade airstrikes and artillery. They were wrong.

As the fight punched into western Mosul, the morgue logs filled with civilians increasingly killed by being “blown to pieces.”

By early March, Iraqi officials and the US-led coalition could see that civilian deaths were spiking, but held the course. The result, in Mosul and later in the group’s Syrian stronghold of Raqqa, was a city left in ruins by the battle to save it.

Most of the civilians killed in west Mosul died under the weight of collapsed buildings, hit by airstrikes, mortars, artillery shells or IS-laid explosives. The morgue provided lists of names of civilians and place of death. Names often included entire families.

The coalition has defended its operational choices, saying it was the Islamic State group that put civilians in danger as it clung to power.

“It is simply irresponsible to focus criticism on inadvertent casualties caused by the Coalition’s war to defeat ISIS,” Colonel Thomas Veale, a coalition spokesman, told the AP in response to questions about civilian deaths.

“Without the Coalition’s air and ground campaign against ISIS, there would have inevitably been additional years, if not decades of suffering and needless death and mutilation in Syria and Iraq at the hands of terrorists who lack any ethical or moral standards,” he added.

Civilian deaths in the second half of the battle reflected the looser rules of engagement for airstrikes and the sheer numbers of trapped residents. From October 17 to February 19, the AP tally found at least 576 deaths by coalition or Iraqi munitions.

From February 19 — when the fight crossed the Tigris River — to mid-July, there were nearly 2,400 civilian deaths. That total is in addition to the 326 confirmed by the coalition in the city. The US and Australia are the only two coalition countries to acknowledge civilian deaths, though France had fighter jets and artillery and the UK also carried out airstrikes. 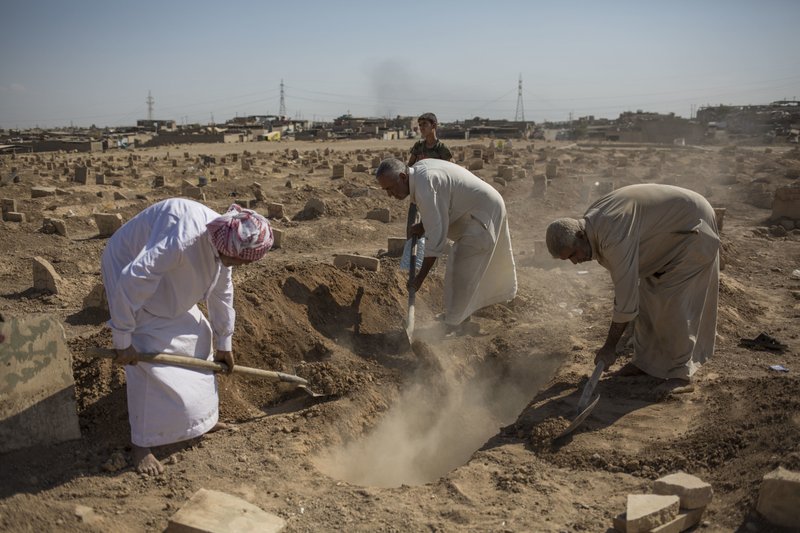 Of the nearly 10,000 names listed by the morgue, around 4,200 were confirmed as civilian dead in the battle. The AP discarded names that were obviously those of Islamic State group fighters and casualties brought in from outside Mosul. Among the remaining 6,000 are likely some number of Islamic State group extremists, but the morgue civilian toll tracks closely with numbers gathered during the battle itself by Airwars and others.

Neither toll includes thousands of people killed by the Islamic State group who are believed to be in mass graves in and around Mosul, including as many as 4,000 in the natural crevasse known as Khasfa.

Imad Ibrahim, a civil defense rescuer from west Mosul, survived the battle to retake the city and is now tasked with excavating the dead. He mostly works in the Old City, where on a recent day the streets still reeked of rotting flesh.

“Sometimes you can see the bodies. They’re visible under the rubble. Other times we dig for hours, and suddenly find 15 to 30 all in one place. That’s when you know they were sheltering, hiding from the airstrikes,” Ibrahim said.

Behind him an excavator dug through jagged cement blocks, searching for the body of a woman who was hiding in her home when it was hit by an airstrike.

Ibrahim said he spent years waiting for liberation, but the victory itself was hollow.

“Honestly, none of this was worth it.”

By dawn, dozens of Mosul families begin to line up outside the civil defense office each day. One by one they flatly describe their personal tragedies: “We buried my cousin’s body in the garden under the tree.” ″My mother was hiding in the back of the house, near the kitchen when the airstrike hit her home.” ″We buried my father in the street in front of our home after he was shot.”

Radwan Majid said he lost both his children to an airstrike in May.

“There were three Daesh in front of my house, so when the airstrike hit, it also killed my children,” he said, using an Arabic acronym for the group.

“We can see their bodies under the rubble, but we can’t reach them by ourselves,” he said. “All I want is to give them a proper burial.”

Reports of civilian deaths began to dominate military planning meetings in Baghdad in February and early March, according to a senior Western diplomat who was present but not authorized to speak on the record.

After a single coalition strike killed more than 100 civilians in Mosul’s al-Jadidah neighborhood on March 17, the entire fight was put on hold for three weeks. Under intense international pressure , the coalition sent a team into the city to investigate.

Iraq’s special forces units were instructed that they were no longer allowed to call in strikes on buildings. Instead, the forces were told to call in airstrikes on gardens and roads adjacent to IS group targets.

“It was clear that the whole strategy in western Mosul had to be reconfigured,” said the Western diplomat.

But on the ground, Iraqi special forces officers said after the operational pause, they returned to the fight just as before.

The WhatsApp group’s name was changed back to “killing daesh.”

The Pentagon investigation into the March strike concluded that a US bomb resulted in the deaths of 105 civilians but ultimately blamed secondary explosions from IS-laid bombs.

The 500-pound (227-kilogram) bomb, the investigation concluded, “appropriately balanced the military necessity of neutralizing (two IS) snipers.” Witnesses and survivors told the AP that IS had not set any explosives in the house that was hit. The house was packed with families sheltering from the fighting.

At the time, just two American officers were fielding all allegations of civilian casualties in Iraq and Syria from a base in Kuwait. The team now has seven members, though none sets foot inside Mosul or routinely collects physical evidence.

The Americans say they do not have the resources to send a team into Mosul; an AP reporter visited the morgue six times in six weeks and spoke to morgue officials and staffers dozens of times in person and over the phone.

Because of what the coalition considers insufficient information, the majority of civilian casualty allegations are deemed “not credible” before an investigation ever begins .

Colonel Joseph Scrocca, a coalition spokesman, defended the coalition figures in an interview in May, saying they may seem low because of a meticulous process designed to “get to the truth” and help protect civilians in the future.

“I do believe the victims of these strikes deserve to know what happened to their families, Scrocca said. “We owe them that.”

Daoud Salem Mahmoud survived the fight for the Old City by hiding with his family in a windowless room deep inside their home. 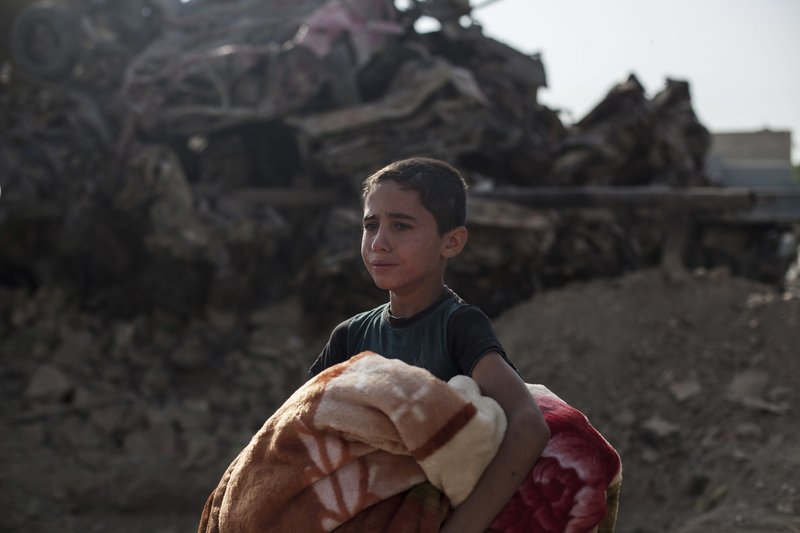 With the fight over, Mahmoud now returns to his neighborhood daily to retrieve the dead. He’s recovered hundreds of bodies of extended family members and neighbors.

A large, imposing figure, Mahmoud breaks down in tears when asked to describe specific events at the height of the violence. But without a moment of hesitation, he said he believes the fight to retake the city was worthwhile.

Despite the death and destruction, he said he now feels like his family has a chance at a future brighter than his own.

“Everything can be rebuilt. It’s the lives lost that cannot be replaced,” he said. Then, shaking his head, he added, “This war, it turned Mosul into a graveyard.”

US stands with Egypt, its people in their pursuit of prosperous future