Real Madrid footballer Sergio Ramos and his family arrived at the Red Sea governorate’s International Hurghada Airport on Monday to spend several days in Hurghada and take a maritime tour through Giftun Islands.

Spanish Defender Ramos will stay in a tourist village owned by Chairman of the Tourist Investment Association of the Red Sea governorate Kamel Abu Ali. The entrance is adorned by a huge poster for Ramos.

Abu Ali has in the past hosted Real Madrid players Cristiano Ronaldo and Karim Benzema and organized sea trips for them as part of promotional tourism campaigns for Hurghada.

Egyptian fans criticized Ramos after he injured Egyptian Liverpool striker Mohamed Salah in the final match of the UEFA Champions League in 2018 against Real Madrid 1-3, causing Salah to be excluded from playing the first match against Uruguay at the 2018 World Cup in Russia.

Hurghada hotels fill up during the Eid al-Adha holiday, 30% increase in prices

Urgent measures in place to confront shark attacks in Hurghada 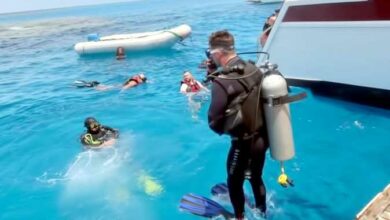