Syrian engineers and Red Crescent officials on Wednesday visited a spillway of a key dam west of the Islamic State group's stronghold of Raqqa, opening the gates and relieving pressure, according to the aid organization and Syrian Kurdish media.

The visit followed concerns that the Tabqa Dam is threatened, endangering the surrounding area that has become a battleground as U.S.-backed forces push toward Raqqa, the IS group's self-proclaimed capital. The main gates of the dam, further to the south from the spillway, are out of service.

The condition of the dam, Syria's largest and a strategic infrastructure still in the hands of IS, has been disputed after conflicting claims that it came under attack from the US-led coalition, damaging the infrastructure, amid an unfolding offensive on the IS stronghold. The US-led coalition denied targeting the dam, behind which lies Syria's largest water reservoir. 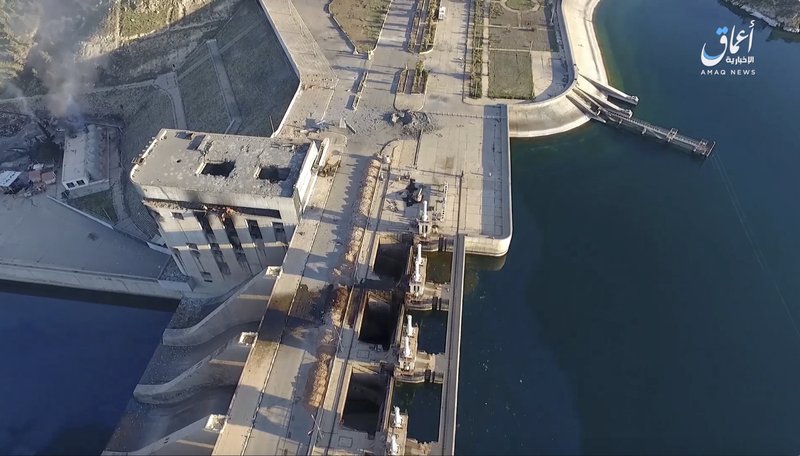 This still image taken from drone footage posted online March 27, 2017 by the Aamaq News Agency, a media arm of the Islamic State group, shows the Tabqa Dam, in Raqqa, Syria. US-backed forces in northern Syria said Monday paused military operations near a major dam held by the Islamic State group in order to allow engineers to fix any problems after conflicting reports about its stability. (Aamaq News Agency via AP)

While IS still controls the main span of the dam and its gates, located about 40 kilometers upstream from the city of Raqqa, the US-backed Kurdish-led forces control the spillway and canal, about 4 kilometers further to the north.

The Syrian Red Crescent spokeswoman, Mona Kurdy, said a team of its volunteers managed to reach the spillway on Wednesday in collaboration with the Syrian ministry of water resources. She said an earlier attempt to reach the site failed because of violence, and a volunteer was killed.

"We lost a volunteer as he tried to carry out his duties. … There were strikes," she told The Associated Press. She didn't elaborate and wouldn't provide further details on the team's mission, citing security concerns.

Opposition activists and former dam engineers said the dam manager who appeared in an IS video about the dangers facing the dam, a technician, and a Red Crescent volunteer were killed late on Monday.

The engineers, who had previously worked in the dam issued a statement, saying the manager and the Red Crescent volunteer were killed as they attempted to reach the structure to deal with leakage in the main chambers. They didn't specify how they were killed.

The activist Syrian Observatory for Human Rights said the manager was believed killed in a suspected coalition airstrike against a convoy after he left the dam in the middle of the night.

The coalition said in an email it was looking into the claim.

The fighting in this part of Syria is shaping up to be the next major battle against IS. Earlier this month, US aircraft ferried hundreds of fighters from the Kurdish-led Syrian Democratic Forces, as well as American artillery and military advisers, behind IS lines. The US-led forces seized control of the Tabqa airbase earlier this week. On Wednesday, fighting between the Syrian opposition forces and IS militants was reported on the dam itself.

Former dam engineers said the opening of the spillway gates would relieve some pressure from the main gate but warned that the dam's main operations have been suspended, including local power generation. 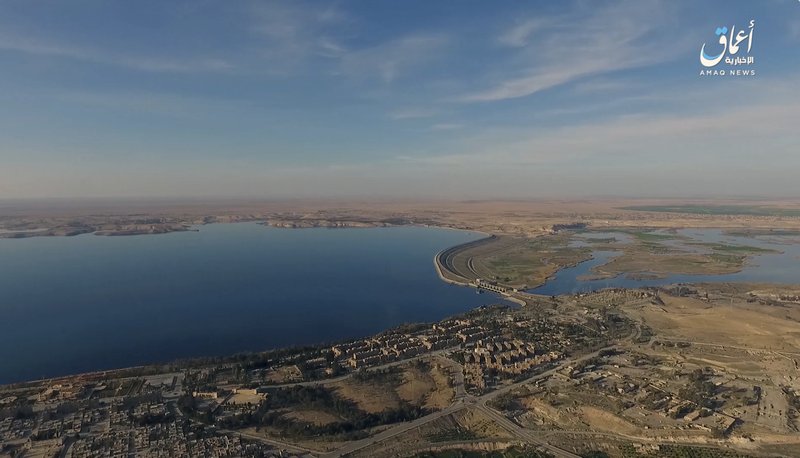 Elsewhere in Syria, a bomb planted on a taxi van carrying university students in the central city of Homs killed at least five people and wounded four on Wednesday, the local police chief told state TV.

Maj. Gen. Khaled Hilal said the explosion went off in the 14-passenger van around midday in the city's al-Zahra district. Most residents of the neighborhood are Alawites, a minority sect that has traditionally formed the backbone of support for President Bashar Assad. The Syrian opposition is mainly drawn from the country's Sunni Muslim majority.

The attack came as Syrian rebels and their families were in the process of evacuating the last opposition-held neighborhood in the city under a surrender agreement with the government. The opposition has criticized the evacuation of the long-besieged al-Waer area, saying it amounts to the forced displacement of civilians, allegations the government denies.

Hilal said initial reports indicate a man placed a plastic bag under one of the van's seats and left the vehicle before the bomb went off. Footage aired on al-Ikhbariya state TV shows the skeleton of the van after the explosion, with the roof blown off and the back-side shattered. A pool of blood was visible near the wreckage.

Meanwhile, Russian officials in Geneva met with representatives of the Syrian opposition on the sidelines of talks mediated by the United Nations, part of efforts to find a political solution to the conflict.

Salim Muslet, a spokesman for the main Syrian opposition bloc gathered in Geneva, said discussions centered on cease-fire violations despite a truce brokered by Russia and Turkey.

He told reporters the participation of the Syrian opposition in the next round of Russia-sponsored talks in Astana, which Moscow has scheduled for early May, was contingent on progress on the ground.

WFP allocating US$ 5.4 billion to Lebanon helps with its worst economic crisis