The suspect in the Monterey Park mass shooting was disarmed by two people when he went to a second location on Saturday night, according to Los Angeles County Sheriff Robert Luna.

Luna had earlier disclosed that a male Asian suspect had walked into a dance hall in Alhambra and that “some individuals wrestled the firearm away from him.”

“Remember, the suspect went to the Alhambra location after he conducted the shooting (in Monterey Park), and he was disarmed by two community members who I consider to be heroes,” Luna said at a news conference Sunday.

“They saved lives. This could’ve been much worse. The weapon that we recovered at that second scene I am describing as a magazine-fed semiautomatic assault pistol. Not an assault rifle, but an assault pistol that had an extended large capacity magazine attached to it.”
Tags
Alhambra County Sheriff dance hall disclosed Los Angeles Luna male Asian suspect Robert Luna. walked 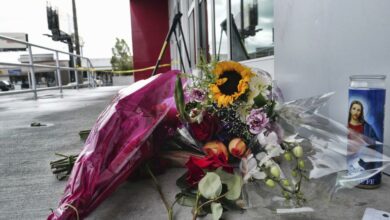