An official report conducted by the Ministry of Agriculture has revealed an increasing shortage in a number of crops including legumes, grains, and oil-producing plants.

Senior sources at the ministries of agriculture and irrigation said recent disputes between Egypt and Nile basin states threaten the country’s plans for agricultural expansion over the coming years, due to limited water resources and Egypt’s dependence on Nile water.

The report said Egypt is unable to bridge the gap in oil consumption. Oil-producing crops only cover seven percent of consumers’ needs, the study found, due to population growth. It was noted that government plans to curb the widening gap involve developing research programs and projects that aim to drive up the productivity of “strategic” harvests.

Though Egypt is one of the oldest agricultural civilizations, it is facing an expanding black hole between its available domestic production and the rate of consumption, both of humans and animals.

The gap has grown as large as 30-35 percent for beans and clover, around 45 percent for wheat and maize, and 93 percent for oil-producing crops. Each gap is filled through imports.

Abu Hadid also noted that the cost of importation maintains an upward direction due to the growth in population that does not match domestic production. He warned this may expose Egypt to substantial problems in the future when it tries to secure its share of the world food surplus, which is vulnerable to upturns and downturns depending on climate change and policy shifts.

Sisi discusses use of torrential rain in agriculture development 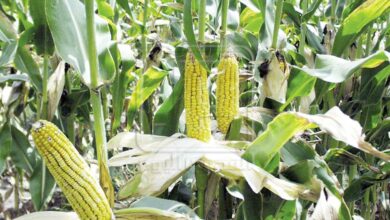