The cabinet decided not to proceed with the demolition of tourist resorts built on plots of land legally allocated to land reclamation projects on desert highways.

Minister of Agriculture and Land Reclamation Reda Ismail told reporters on Saturday that the government will instead impose fines on violators.

Official sources estimated that the revenue from the fines will be over LE3 billion.

Ismail added that the ministry's technical authorities are determining the scale of the violations before collecting the fines. Fines will be progressive, with higher fines imposed for graver violations, he explained.

Ali Ismail, executive director of the Agricultural Development Authority, emphasized the role of investors in taking the initiative to pay the fines imposed on them.

He said that the state is planning to schedule the fines so that they can be paid over a grace period of five years but immediate payment will be rewarded with a 10 percent discount on the total amount of the fine.

Plots of land will only be confiscated from violators of the law in extreme circumstances, he added. 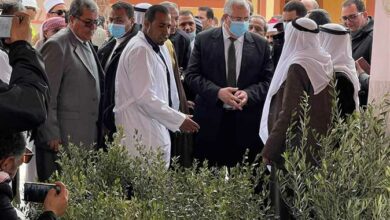 Agriculture Minister: We target reclaiming over 500,000 feddans in Sinai