Few beyond the metals industry had heard of Mariupol’s Azovstal Steel and Iron Works before it became the scene of a desperate last stand against Russia’s invading forces.

Until recently Azovstal was a major player on the global stage, producing 4 million tons of steel annually and exporting the majority across the globe, according to its owner Metinvest Holding, Ukraine’s biggest steelmaker.

From London’s Shard skyscraper to Hudson Yards in Manhattan to Genoa’s San Giorgio Bridge (which replaced the collapsed Morandi Bridge), steel produced at Azovstal is used in some of the world’s most recognizable landmarks.

But for weeks now, the world has been gripped by the battle raging over the steelworks on the coast of the Sea of Azov.

The pocket of Ukrainian fighters entrenched at the plant has become a symbol of the country’s unwavering resistance in the face of an enemy that far outnumbers them.

Yuriy Ryzhenkov, CEO of Metinvest Holding which owns the plant, is devastated by what he sees happening to the plant and to Mariupol.

“The city’s literally under siege for almost two months now. And the Russians, they don’t allow us to bring food into the city or water into the city,” Ryzhenkov says.
“They’re not allowing us to take the civilians out of the city in a centralized manner. They make the people either move out in their own automobiles or even walk by foot through the minefields. It’s a humanitarian disaster there.”
Tags
automobiles CEO of Metinvest Holding humanitarian disaster Mariupol Minefields Yuriy Ryzhenkov

“I am the happiest woman in the world,” says wife of Azovstal fighter who was freed in prisoner swap 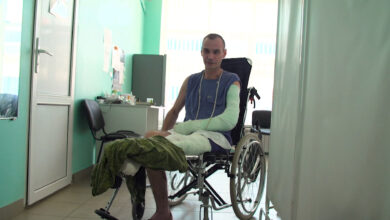 When Russia is the only way out of a war zone, Ukrainian refugees must hide their hatred